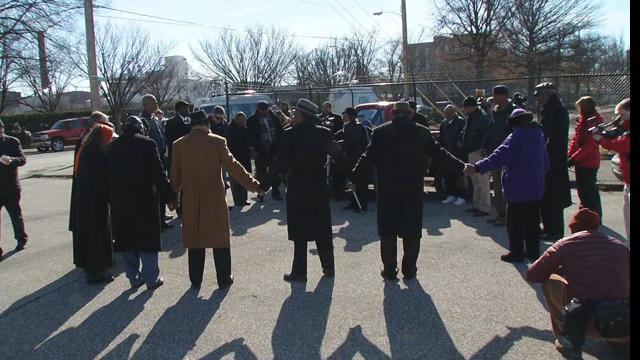 I thought about this last night quite a bit. I can see how some would look at such a spectacle as ridiculous.

What I then tried to do was to look at this thing from the situation from the pastors, not necessarily adding any additional biases or baggage to the calculus. Rev. Charles Elliott Jr. is 80 years old. He is one of the dwindling number of people left who REALLY can say that they "marched with Dr. King," and be telling the truth.

I look at the pastors in their sixties and seventies. How they've seen parts of the West End "rise up" with hope in the late 1960s, go through the Parkland riots of 1968, observe how *the entire West End* was abandoned through white flight and benign and hostile neglect through the 1970s and most of the 1980s, as businesses boarded up, neighborhoods declined and little else rose up to take their place...

How the Philip Morris plant, which provided jobs for hundreds of Louisvillians, withered up and went away. How the property was bulldozed, and despite a lot of hope and occasional happy talk, laid abandoned for years and years. Years observing the unemployment increase, the despair increase, all the while striving to preach to the people to hold and keep their heads up.

Now keep in mind that these brothers and sisters aren't architects. They aren't captains of industry to marshal large amounts of resources and/or influence to spearhead projects and inject direct economic opportunity into communities. These brothers and sisters aren't urban planners, with the education and training to understand that long-term planning and strategic development for a community really does matter.

These brothers and sisters live in a town where the people and political machinations tend to considerably cliquish, where who you know and the access that one has to them is often more important that what you know...and in this environment, all they have seen is a big vacant lot with piles of dirt. For nearly 15 years.

It is in the midst of those considerations that I temper my judgment, that I ease up on the righteous indignation of my old-school Black nationalist sympathies...and I see that we have a hurting community with a high amount of unemployment and a dearth of jobs - of any kind - in the living spaces that make up this place.

It is in the midst of all of this that I pump the brakes on any disgust, and strive to be more focused on pursuing the things that I understand and know, and striving the educate the people as best I can along the way. Doing all of this while striving to continue to learn more and pursue light in the subjects that I do not know...

We all want a better West Louisville. Any plans or plots that are less than savory will reveal themselves in time. It is my continued hope that we can continue to get a critical mass of folk striving toward productivity as the West End rises to greater and more positive heights.