Natures Methane has announced plans to locate an anaerobic digester in the 800 block of South 15th and 17th Streets. Councilman James is inviting the community to ask questions and learn more about the company's operations and plans for the future.

For more information about the community meeting, contact Councilman James' office at 574-1106.

The University of Louisville is sending psychologists into the city's poorest community in the face of drugs, domestic abuse and some unimaginable trauma. West Louisville, once known for being rich in family, is now plagued by poverty, broken homes and high crime.

Dr. Eugene Foster runs the Cardinal Success program, a new counseling clinic open to anyone in west Louisville for FREE. The Cardinal Success Program is designed to bring access to quality counseling and psychology services to underserved members of the community, & is committed to building healthy communities by helping individuals and families through improved access to mental health and wellness services, counseling, and career and college readiness services. Services include mental health therapy, counseling for grief and loss and post traumatic stress. With Foster, a team of U of L graduate and doctoral students handle the day-to-day patient care.

"We're preparing the next generation of counselors and psychologists," Eugene said in an interview with the Courier-Journal. "It's a win-win situation. We don't have to charge residents of the community, and we can give a real, quality training experience."

The Academy at Shawnee piloted the Cardinal Success Program last school year and the university hopes to mirror this success at the new clinic at The Nia Center.

LOUISVILLE, Ky. (WDRB) -- Empowering West Louisville from the inside out, that’s the goal of a new coalition of Louisville churches.

It started at Simmons, an historically black college, and has spread to more than a half dozen mostly white churches.

There's a lot to like in West Louisville, beautiful homes, parks and parkways, and hard-working people.

But there are also vacant houses, abandoned factories, unemployment, and pockets of crime.

“What is needed is for the people in West Louisville to be empowered,” said Kevin Cosby, president of Simmons College of Kentucky.

That's why Cosby says the school has formed a new coalition of urban and suburban, black and white churches to empower West Louisville.

Hundreds came to St. Stephen Baptist Church Thursday, September 23 for Empower West Louisville, a coalition of urban and suburban churches with the goal of strengthening West Louisville communities through a renewed support of West Louisville businesses and community nonprofits and institutions, under the focus of faith and progress.

Along with the summit was also announced the SEED (Sowing Excellence through Economic Development) microloan program, in tandem with Kiva Zip in Louisville, where no-interest microloans will be given to qualifying small business efforts. Before and during the actual summit, a marketplace featuring local West Louisville-focused businesses presented their goods and services in the goal of having new customers and markets. 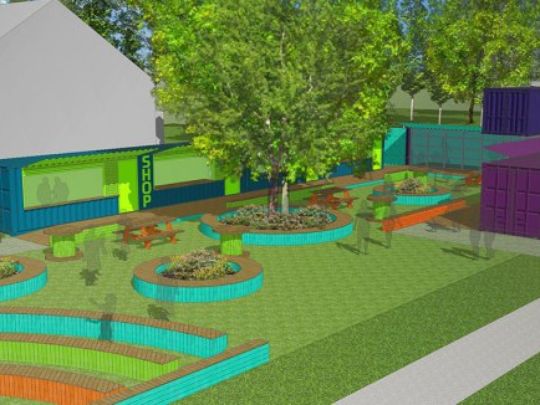 Arranged around a lone tree on two long-vacant lots on Dixie Highway, some half-dozen shipping containers will soon arrive to house a retail and restaurant complex that will also provide space for education, health screenings and job fairs in the Park Hill Neighborhood.

Opportunity Corner is the vision of Canaan Community Development Corp. executive director Terra Leavell. Searching for a west Louisville home for the programs of Canaan Christian Church that promote education, health, economic development and violence eradication, Leavell has been considering the use of vacant land in recent years.

The rest of this Jere Downs' article can be found at the Courier-Journal link.